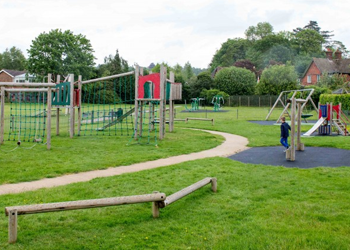 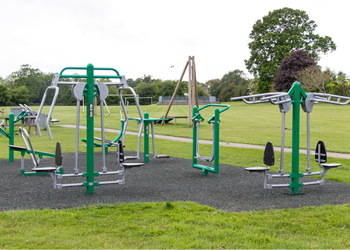 On the 9th October 1934 Mrs Saley proposed that the Council take the necessary steps to secure land for a Recreation Ground for South Nutfield.

Agreed (11th June 1945) that Godstone RDC be asked to consider buying a part of the Brays Estate as a playing field.

Since that time, the field has been used as a Recreation Field under the authority of Tandridge District Council for the benefit off the whole Parish.

There is a children’s playground and adult outdoor gym equipment sited there. Nutfield Football Club also make use of the field for youth football.

Whilst this recreation ground on Mid Street is run by Tandridge District Council, Nutfield Parish Council own and maintain the Basketball Court within this space. Access to this facility is free, and all age groups are very welcome, but please take your litter home or use the nearest bin. 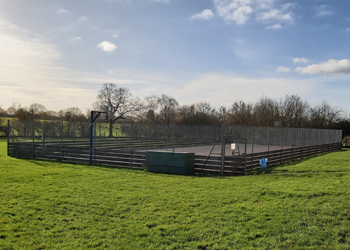 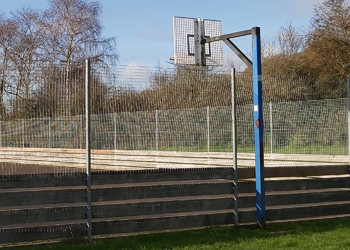 In the Parish Council meeting minutes of 14th February 1905, it reads: “Recreation Ground. Mr. Maw stated to the council that under his late father’s will, the Vintage Field was left for a recreation ground for the use of the people of the parish.” (There is a double meaning here. The land though commonly called vintage was in the eastern portion of Blacklands (ed. now demolished). The name vintage was properly Vinage, from the medieval Vinagium, but this was in fact a field some distance eastwards). On the 11th July 1905 a letter was read from Messrs Satchell & Chapple. Mr Tidey proposed and Mr Dixon seconded: “That the Parish Council accept the Trust of the Vintage Field as a recreation ground for the Parish under the terms or the will of the late Charles Maw Esq.”

Proposed Mr Tidey and seconded by Mr Edwards “That the sum of £17 10s for Estate Duty and the sum of £22 10s 6d for Succession Duty be paid forthwith” Carried unanimously.

12th September 1905 saw the Vintage Field deeds of this property were handed over to the Council by C.T. Maw Esq. and the Clerk requested to deposit them with the London & County Bank, Redhill.

The laying out and planting of the field was paid for by C.T. Maw Esq. who kindly donated the sum of £110 for this purpose. Past use since the 1920’s has been as a cricket field used by Nutfield Cricket Club for many years and since 1932 as a football field.

The woods at the rear of the site that slope down to Gore Meadow are also maintained within the Trust by the Parish Council. 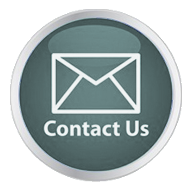 For further information or assistance
please contact the Parish Clerk.